What is a “conservative” treatment?

Treatment plans that do not rely on extensive removal of tissue and can be done under local anesthesia at a doctor’s office are considered “conservative” because they have very minimal damage or risk to the patient. These surgical techniques result in much smaller wounds and very little tissue removal.

Minimally invasive surgery is performed through small incisions instead of large openings. You will likely have a quicker recovery time and less pain than traditional larger surgeries but with the same benefits as traditional surgery.

An abscess is a local accumulation of pus anywhere in the body, formed by tissue disintegration, and surrounded by an inflamed area. Normally, the proper treatment of abscesses is to drain it – not excise with large amounts of tissue removal. Pilonidals are just about the only time doctors think excision is the correct treatment for an abscess. One of our primary missions is to change that thinking and focus on finding the Pits and tracts that are causing the abscess.

Pits provide the opening for bacteria to breach the skin barrier and need to be removed, otherwise the infections will continue to reoccur. The problem is not that the tissue is “diseased”, it’s that there is still an opening somewhere in the midline that is allowing anaerobic bacteria access under the skin. Those openings can hide extremely well and sometimes only be seen when the skin is pulled downward and stretched.

The basic premise of Pit Picking is to remove the source of the infection without removing any deep tissues.

Traditional lancing (i.e. simple drainage of abscess) has a recurrence rate of 85% – meaning most people need further Pilonidal treatment than just draining the abscess. Bascom proposed that this was because simply lancing the abscess wasn’t enough; the Pits that were creating the abscess need to be removed as well. When the Pits are removed shortly after the lancing (an average of 10 days later when the swelling goes down and the Pits are more visible), the need for further treatment drops to 15-20%.

Pit Picking technique has evolved since it was originally described by Dr. Bascom and improved upon with the Gips Procedure and EPSiT.

Where it’s done – at the doctor’s office, local anesthesia

Recovery time – two to three weeks, depending on necessity of lancing at the same time.

For more detail on various published studies by Bascom and others, please visit our Library.

What it is – Invented by Moshe Gips (Israel) this technique improves upon Bascom’s Pit Picking concept by using Trephines (a surgical instrument for cutting out circular sections) to punch out the pits, then the tracts are removed and any abscesses debrided of damaged tissue.  The resulting wounds are left open to heal.

Where it’s done – At the surgical center under spinal or local anesthesia (day surgery).

What else you should know – This technique is relatively new (2008) and it is gaining traction with surgeons committed to minimally invasive options. You can help spread the word by asking about it when you interview doctors and sending your doctor the link below.  They will probably get held up by not knowing how to bill for the procedure, the suggested codes are 11770 or 11771. The next iteration of Gips is EPSiT, which solves the problem of not being able to see under the skin to find more tracts.

What it is – Inventd by Piercarlo Meinero MD, the EPSiT procedure is a new video-assisted technique for the treatment of the pilonidal sinus disease and its recurrences. It uses a custom ﬁstuloscope to locate all the tracts and sinus cavities underneath the skin and remove them without large cuts to the skin and tissue.

Where it’s done – At the surgical center under spinal or local anesthesia (day surgery).

What else you should know – This technique is very new and there are only a few doctors doing it, you can help spread the word by asking about it and sending your doctor the link below.  They will probably get held up by not knowing how to bill for the procedure, the suggested codes are 11770 or 11771.

Description of the technique (choose translation to English)

Dr. Brian Shrager (NJ) provided these pictures of the endoscopic view of a sinus (the blue arrow) being grasped and extracted using the EPSiT procedure. 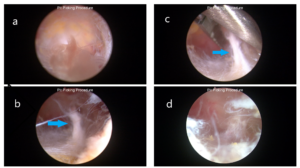 Pilonidal sinus being extracted via EPSiT.

The main overview page for our Treatments section where you can review surgery options, plan for surgery day.

Health care is a partnership; choose well when it comes to doctors and hospitals. How to build a great team.

Look for a doctor near you from our worldwide list of Cleft Lift surgeons and recommendations on our forums.